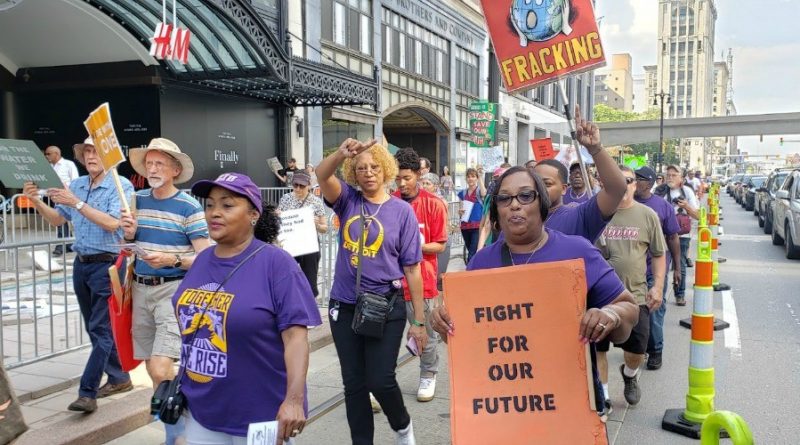 The city exhibits all of the problems the framework is meant to heal. by Eleanore Catolico

In Detroit, more than 8,000 residents live in what has been called one of the most polluted ZIP codes in the state. Located in the city’s southwest corner, 48217 is known for its persistently poor air quality, where hundreds suffer from asthma, cancer, and other related health issues. The surrounding area has 26 industrial sites whose greenhouse gas emissions are being monitored by Michigan’s Department of Environment, Great Lakes and Energy. And one of the largest polluters, Marathon Petroleum Corporation, whose processing plant is headquartered in 48217, has received several violations from the state’s environmental regulatory agency over the years.

Just last week, two contract workers were hospitalized after an oil vapor leak at Marathon. The leak, which produced a pungent smell, residents said, led to temporary road closures. And during a congressional field hearing this week on air and water quality issues and their adverse effects on communities of color, U.S. Rep. Rashida Tlaib (D-Michigan), who grew up in Southwest Detroit, rebuked Marathon for its polluting history.

Calling them “corporate polluters,” Tlaib said the big oil company is unlikely to face any meaningful consequences. “They’ve just written off these leaks as a cost of doing business,” she said, while residents are “still searching for answers. “What was released? Is it safe to breathe the air?”

Other nearby communities also continue to be harmed by air pollution. In the Delray neighborhood, the construction of the Gordie Howe International Bridge will increase air and noise pollution, experts say. The city’s housing swap program has offered to relocate the residents because of the construction. Also, Fiat Chrysler’s assembly plant expansion on the east side of the city is raising alarms that it will exacerbate the current air pollution.

And still, throughout the city, thousands of residents continue to battle water shutoffs, an ongoing process that five years ago left about 50,000 residents without running water. And this past school year, some schools had to restrict water use because of lead. About 70 miles north, the city of Flint, with a similar demographic of Detroit, has made national headlines over the past several years for the water crisis created when the state switched its water source to the toxic Flint River.

So when it was announced that the second round of the 2020 presidential debates would be held in Detroit, residents from Indigenous, Black, and Brown communities, environmental activists, union workers and lawmakers across the state came together to form Frontline Detroit Coalition. Their goal is to bring radical transformation to how the city functions, pivoting from reliance on fossil fuels, creating jobs rooted in a green, sustainable economy, and advocating for an equitable distribution of resources so that all Detroiters may thrive. The coalition is led by dozens of organizations, including the Michigan Environmental Justice Coalition, the Sunrise Movement, Sierra Club, the Climate Justice Alliance, Soulardarity, We the People Michigan, and several others.

National media outlets covering the two-night event spotlighted one of the ground zeroes of the climate crisis in the United States, Detroit, whose urban infrastructure and economic development was based on auto-manufacturing and fossil fuel industry jobs. Thousands descended on downtown Detroit in July on the eve of both nights of the debates to bring attention to Detroit’s problems—environmental and otherwise. Frontline Detroit’s call was to Make Detroit the Engine of the Green New Deal, referencing the policy resolution introduced by U.S. Rep. Alexandria Ocasio-Cortez (D-New York), which seeks to address climate change and economic inequality.

During the debates, the candidates spoke platitudes and postured to autoworkers, and there was a brief dialogue about keeping drinking water safe in the aftermath of the Flint water crisis. However, none of the candidates proposed a specific plan to correct the city’s prevailing ills including poverty, crime, lack of affordable housing and jobs, and pollution—in the air and water.

Frontline Detroit’s localized application of Green New Deal principles is informed by combating the historical ills of the city, led by a framework that addresses problems intersectionally: systemic racism, income inequality, and climate crisis are bonded together in how they undergird contemporary policy actions and feed into a nexus of oppression.

National coverage of the city’s resurgence has ignored the current plight of frontline communities—those disproportionately affected along racial and income-based lines. For example, the implementation of state emergency management laws, which have not been repealed, superseded the authority of elected local leaders in Michigan’s mostly Black and Brown cities, which precipitated the Flint water crisis. And while some residents continue the struggle of accessing clean water and others are under the threat of eviction because they’ve refused to pay for poisonous water, thousands of Detroit residents continue to have their water shut off. This lack of access to clean water services has led to health risks, and poses the threat of removing small children from their homes. A state law says that if a home has no running water, a parent can be reported for negligence, and the Department of Health and Human Services can intervene, though no one has reported this. Still, it’s a huge worry for residents who cannot pay water bills. And the ongoing tax foreclosure crisis continues to displace residents.

All of these are compounded by the polluting legacy of the industrial sector that has caused lasting poor air quality conditions.

By centering the aforementioned issues and their impact in these frontline communities, Frontline Detroit believes the city is the perfect place—the engine—for implementing the Green New Deal.

Michelle Martinez, the statewide coordinator for the Michigan Environmental Justice Coalition, and one of the organizers of FDC says the coalition is reviewing the Democratic primary candidates’ climate platforms and working with local and state legislators to advise them in drafting their environmental policies on the needs of frontline communities.

Many of Detroit’s frontline communities dwell in a concentration of the city’s industrial centers, or what activists have dubbed “sacrifice zones” because these communities, the majority of whom are low-income people of color, have borne the brunt of environmental pollution.

“Climate change is real. We are on the frontline. We are one of the communities impacted by climate change because we are a community of color,” Theresa Landrum, a longtime Detroit activist living in the 48217 ZIP code, says.

Landrum, along with Vincent Martin and other residents, have been at the forefront of fighting environmental abuses for decades.

One morning in the early ’80s, residents in 48217 awoke to loud noises and cracks to their homes’ walls, windows and driveways, Landrum recalls.

“Explosions started to happen, and we didn’t know where it was coming from,” she says.

After investigating, they found that the Detroit Salt Company had been blasting dynamite beneath neighborhood homes to extract salt pillars, because Detroit sits atop a massive salt mine 1,200 feet underground. So the residents of 48217 organized and protested. They were 22 block clubs strong.

“It was so bad in here when you were driving on the freeway, as soon as you smell it, you know you were in Southwest Detroit. The odor was so terrible,” Martin says. “We have been poisoned everyday of our lives, forever. We don’t know what it’s doing to our DNA, the fetuses of newborn babies, what it’s doing to kids.”

Justin Onwenu, a community organizer with the Sierra Club, says a Green New Deal framework in Detroit can be a guide toward rectifying these ills, but frontline communities need to lead the conversation.

Councilwoman Raquel Castañeda-López, who represents constituents of District 6 where 48217 is located, follows an environmental justice and equity framework inspired by GND. Her office is working on a study that would mitigate the impacts of commercial trucks on residential roads, creating buffer zones and requiring industries to produce health assessments before beginning operations.

“So the larger conversation of the Green New Deal and why we need to try to address climate change on a global scale is important but sometimes it’s a different conversation that happens at the local level,” Castañeda-López says. “They talk about issues that impact them the most. My children are sick from — there are so many people dying in my neighborhood from cancer — that’s how we translate some of the broader, lofty policy goals to the local level.”

Led by Castañeda-López, the City Council passed a resolution this summer in support of the Green New Deal. And the council is taking steps to address the city’s climate problems, the councilwoman says, starting with passing a greenhouse gas emissions ordinance that would reduce emissions from municipal buildings, and getting the business sector to adopt sustainable practices. They’ve also created the Office of Sustainability, a department to deal specifically with climate-related and environmental justice issues, which released a plan earlier this summer.

Meanwhile, the stories of the city’s resurgence overlook the struggles of the lifelong and longtime residents, and the local and grassroots efforts to combat them.

“When people talk about resurgence or a comeback, it’s a discredit and a disservice and erases and ignores the history for all the people that were here. For me, it feels like colonialism — this colonial mentality. It’s very racially and economically based,” Castañeda-López says. “Now they see the city as something viable and something worth investing in that discredits people that sustained the cities. Whether or not you thought it was good, they still sustained the city.”

This resilience and continued drive of Detroiters makes the city the prime location to implement Green New Deal reforms. A national dialogue about the Green New Deal cannot ignore its application on the local level, Onwenu says, especially around reframing how outsiders have touted the city’s revitalization. For a serious conversation about the revitalization of Detroit and all of its residents in an equitable way, a Green New Deal-inspired framework is critical. 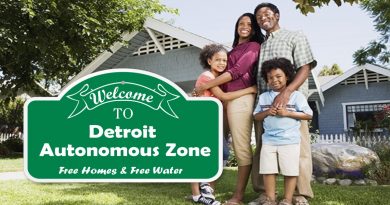