The federal government announced Thursday that roughly 26.5 million people nationwide have filed jobless claims since mid-March—a revelation that sparked yet another wave of demands for the Trump administration and Congress to respond to the economic fallout of the coronavirus pandemic in ways that actually serve the needs of people hardest hit by the crisis.

In response to new U.S. Department of Labor (DOL) data showing that over 4.4 million people filed for unemployment insurance (UI) in the week ending April 18, meaning about one in six workers have lost their jobs during the past five weeks, Princeton University professor Eddie S. Glaude Jr. called for action that matches the scope of the disaster.

“We need a response that is at the scale of this catastrophe,” Glaude tweeted. “My God…”

Journalist Rania Khalek shared on Twitter one of her videos for In the NOW‘s “Soapbox” channel and declared that the one-time payment of $1,200 to adults who earn less than $75,000 a year—authorized under the Coronavirus Aid, Relief, and Economic Security (CARES) Act last month—hasn’t been sent to many Americans yet and “isn’t going to do a damn thing.”

Former Democratic political adviser Peter Daou decried “a corrupt system that protects only the rich” and provides “no real relief” to people who are under extreme duress, dying, and without food, healthcare, homes, or savings in the midst of a pandemic.

The conditions evoked comparisons to both the 20th century’s Great Depression and the more recent financial crisis that began in 2007. As Glassdoor senior economist Daniel Zhao told Reuters, “Today’s report shows the labor market is almost certainly pushing into new territory, jolting the unemployment rate up above the Great Recession’s 10% peak and wiping out more jobs than we’ve gained in the recovery.”

This is the worst labor market the U.S. has witnessed since the Great Depression. Should current trends continue, we may well exceed that era’s peak unemployment rate of 24.9% percent in the coming weeks. For now, the social consequences of the present crisis are less dire than those of the early 1930s only because the American social safety net—however patchy and threadbare—is more robust today than it was then. And the $600 a week boost to federal unemployment benefits that Democrats pushed into the CARES Act (over Republican opposition) will spare millions of Americans from suffering catastrophic losses of income.

But the fact that the welfare state has rendered the present recession less devastating than those of the pre–New Deal era does not weaken the case for further intervention—it strengthens that case. There is no reason for Americans to accept the present levels of unemployment and economic hardship as inevitable. Rather, this week’s surge in jobless claims is, in no small part, a product of Congress’s inadequate support for employers, states, and cities.

Levitz detailed shortcomings of the Paycheck Protection Program implemented under the CARES Act to provide relief to businesses impacted by the coronavirus lockdowns, then argued that “Congress’s most egregious failure, however, has been its refusal to provide more than $150 billion in aid to states and cities.”

In a series of tweets Thursday and a blog post for the Economic Policy Institute (EPI), the think tank’s senior economist and director of policy Heidi Shierholz explained the five recent weeks of DOL figures (pdf), shared employment projections for the next year, and—like Levitz—pressured members of Congress to step up the federal response.

EPI projects that by the end of June, net decline in employment could surpass 30 million, and “even under the best-case scenario” the nation’s unemployment rate could remain as high as 8% this time next year.

The CARES Act and a Senate-approved coronavirus bill expected to pass the House Thursday “both had some important provisions, but they are no match for the damage the economy is facing,” wrote Shierholz. “Federal policymakers need to do more.”

“The next relief and recovery package should provide $500 billion in aid to state and local governments, extend unemployment insurance benefits, provide better protections for workers and jobs, and include funding to safeguard our democracy,” she added. “And importantly, federal government relief should be tied to actual economic conditions (and not solely the unemployment rate), so that these provisions do not expire too early, when the economy and the people in it still need them.”

Shierholz also noted that “the UI claims of the last five weeks, while extraordinary, don’t even include most people who aren’t eligible for regular UI but are nevertheless out of work due to the virus—people like gig workers or independent contractors, and many others.”

“The CARES Act included an extension of unemployment coverage to many who fall through the gaps in our regular UI system, called Pandemic Unemployment Assistance (PUA),” she wrote. “In almost all states, however, the PUA system is still being set up, so the vast majority of workers who are eligible for PUA (but not regular UI) are not yet receiving benefits.”

The Associated Press shared the story of Sasha McVeigh, a musician in Nashville:

Having grown up in England with a love of country music, she spent years flying to Nashville to play gigs until she managed to secure a green card and move permanently two years ago. McVeigh had been working steadily until the city shut down music clubs in mid-March.

Since then, she’s applied for unemployment benefits but so far has received nothing. To make ends meet, she’s applied for some grants available to out-of-work musicians, held some live streaming concerts, and pushed her merchandise sales.

McVeigh told the AP that she had “managed to just about keep myself afloat” by cutting expenses to a bare minimum, but she was worried about the months to come.

The fury in US cities is rooted in a long history of racist policing, violence and inequality 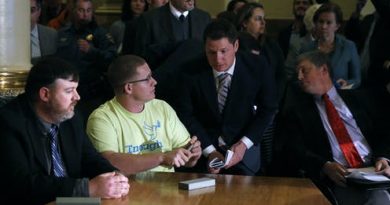 Supreme Court to decide the future of the Electoral College